What is the Abilene Disc Golf Association? 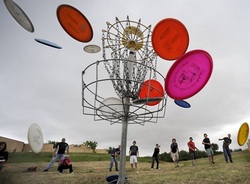 In the early 90's, the West Texas Disc Twisters was formed to bring disc golf to Abilene. Over the next several years, through disc sales and various other fundraisers, baskets were slowly added to Cal Young Park. Concrete tee pads were added on 2001. Support and participation slowly faded away and by 2003, the West Texas Disc Twisters basically dissolved. Over the next 5 years, participation and and interest in the club and disc golf in general slowly grew to the point that in 2009, a new club was formed: the Abilene Disc Golf Association.  One January 1, 2010, The ADGA officially kicked off with 63 members the first day.

Membership in the ADGA is open to EVERYONE.  Whether you have an interest in playing disc golf or simply want to contribute, this club is for you.  Currently, Membership dues are $25 per year.  Membership benefits include: